why did the hobby farmer cross the creek?

To get to the other 2/3 of their property they had never set foot on before!

It's true. We probably broke a few cardinal rules for buying an acreage -- we only saw the property twice, in the dead of winter under record snow cover, and we had no means to see the majority of the land that lies across the creek. There have been, and will continue to be, surprises (both good ones and unfortunate ones) along the journey. But in spite of the fact we currently have no TV, cell service and internet are hit and miss, and most of the world is in the midst of a crippling stay-at-home pandemic, we have not once since arriving here felt boredom; not for one millisecond.

The creek was not too big a deal and probably cross-able in galoshes a few weeks ago -- but there was so much snow either side that it would have meant carrying snow boots along, changing footwear, and trudging through 3 feet of snow on the other side. It seemed a bit much. Now, of course, the spring thaw is well underway and the creek has swelled to, well, not a raging river or anything, but certainly more than a pair of Canadian Tire rubber boots (my everyday footwear at the moment) could tackle without possible mishap.

My guy, ever the engineer, has plans for a more fun, less precarious crossing in the near future, but today the goal was simply to get to the other side (and provide an access for future development of the other crossing plan).

We had a good start in the form of a very large cedar which toppled across shortly before our arrival last month. 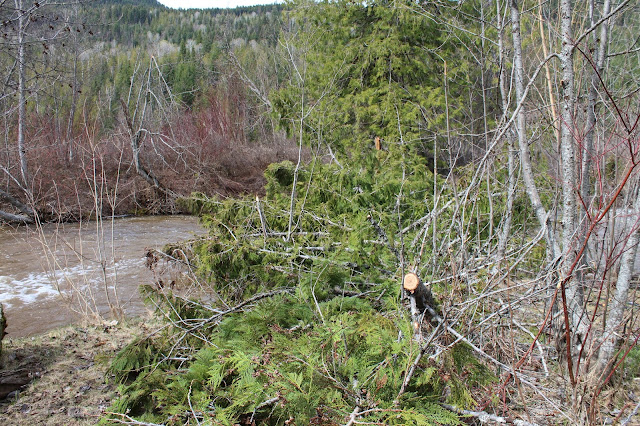 A chainsaw was fine for the on-land part, but once on less sure footing, My Guy reverted to using a handsaw, and it really didn't take long to clear a path! 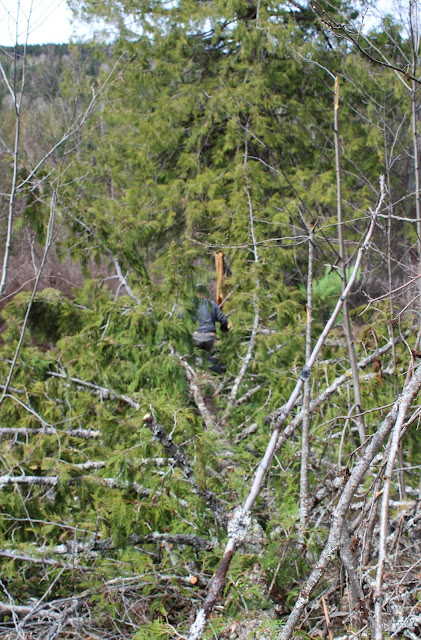 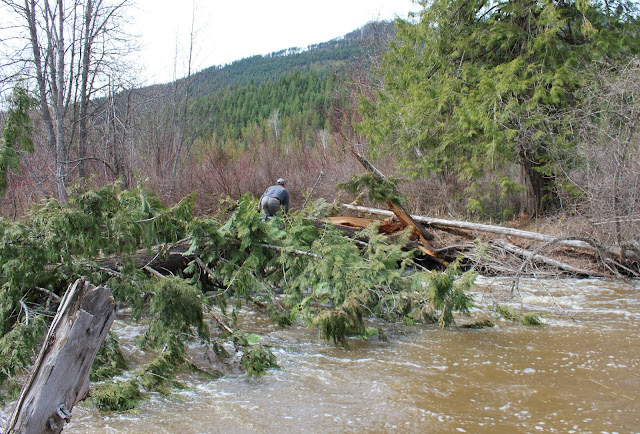 ...while the dog cavorted happily downstream. 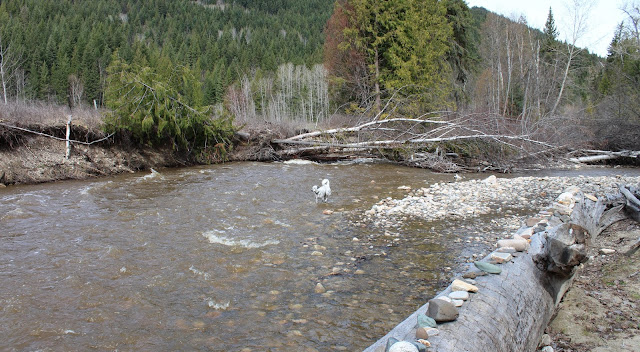 Success! This was actually a pretty emotional moment! 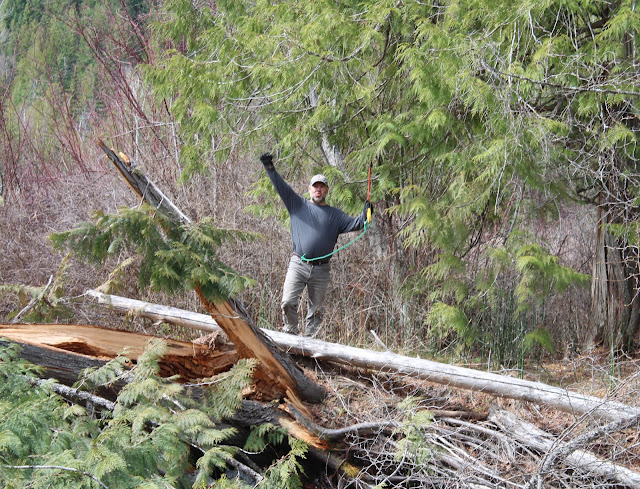 Phase 2 was to string a rope across to add stability, and safety, to the crossing. We needed a really long rope -- which we had, until Edward Scissor-Jaws (as we sometimes call him) got a hold of it and decided it needed cutting in half. He's a dog of many talents, some more handy than others. Anyway, a good knot fixed the problem: 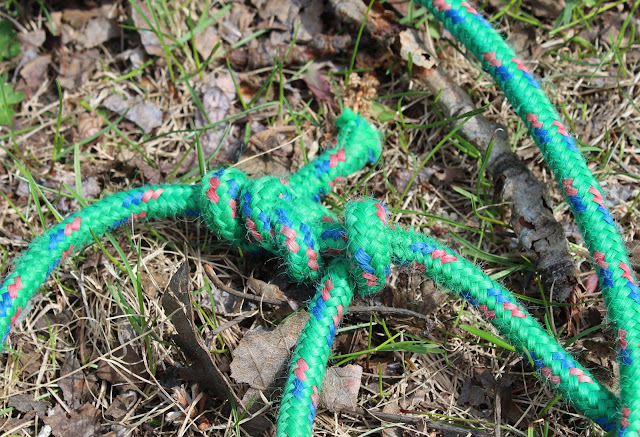 Finally, it was my turn to get across! A view from the other side! 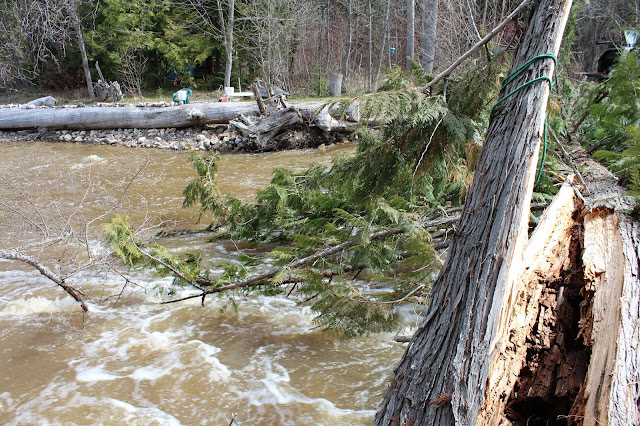 And what, you ask, is on the other side? I'll tell you. It's freedom. It really feels different to be somewhere that's really inaccessible by normal means -- even the trees seemed to be waving their arms in celebration of the moment: 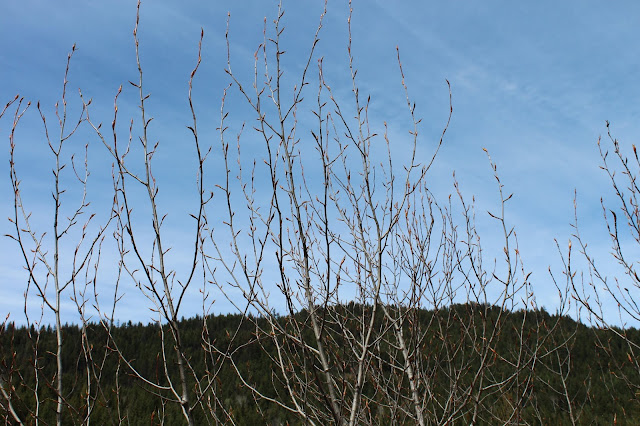 There's a cleared field on this side which was used to grow hay at some point in the past but now crisscrossed with game trails. We marched around it, glimpsing the house from this strange new angle. 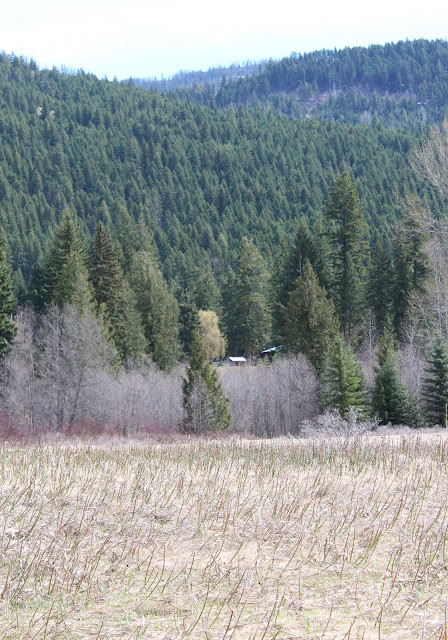 A stream burbles up in places, keeping the back of the field under an inch or two of water. 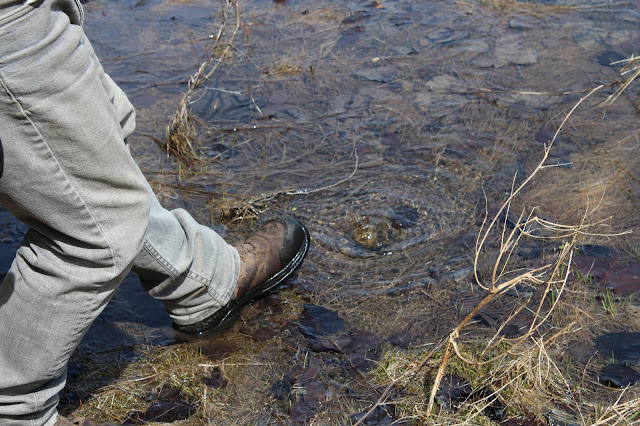 And there was an old blue trailer tucked into the trees, retired there in 2001 we'd assume, two property owners ago. 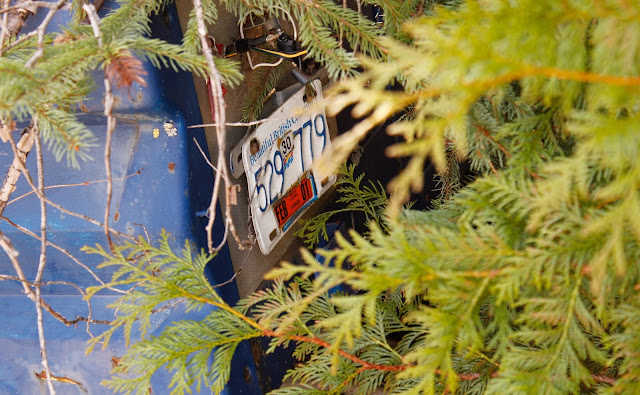 There's much more to explore. Beyond the open field is a wooded area, still our land, that extends up the slope halfway to the ridge. There's evidence of an old road and a few trails to follow. But that'll be another day.
We headed back to the house again, for a late lunch and celebratory beer and My Guy summed it up quite nicely -- "I think we're in our element."
Labels: happenings hobbyfarm